Coming so laggingly after the tour, it’s not surprising that this diary feels more like housekeeping. The last few weeks have been a whirlwind of frenzied overwork – though it’s a whirlwind on which Sikes & Nancy has happily thrived. I’ve had a photoshoot at St Paul’s Cathedral, dashing up and down the cold stone steps, as well as at 48 Doughty Street, where Dickens wrote all of Oliver Twist. The latter took in Linda Marlowe, in full Miss Havisham regalia, the both of us leering and posturing behind the iron bars of the Marshalsea. The children did right to stare. I’ve spent day after day in the theatre during the Preview phase, twisting the show into its best-ever shape under the first-ever guidance of outside eyes. I’ve even survived the long-dreaded Press Night, thanks to the support of some wonderful friends, and have managed to avoid every last review. Aside from those extracts posted up outside the theatre, which is hardly likely to print ‘SHAMBLES’ or ‘EXCREMENT’ in bold type. And the voice has not only survived but strengthened. I’ve actually started to enjoy myself again. I must be careful.

Currently, I’m drifting between Trafalgar Studios and whatever vacant beds crop up around Southfields, Wimbledon, Palmers Green and Highgate. No doubt I’ll be writing through the whole experience at some point in the New Year. For now, though, I’ll devote my fractured energies to the last three dates of the tour. There’s a definite arc there, almost a narrative, which gives me the solemn duty of shortening the separate entries. Of trying, anyhow. Lucky you. But lucky me.

First, however, here are my previous Sikes & Nancy diaries: ‘Meeting the Villain-Hero’, ‘Dreaming to Order’, ‘Forcing the Soul’, ‘The Hertfordshire Horror’ and ‘Into the Black Lagoon’. 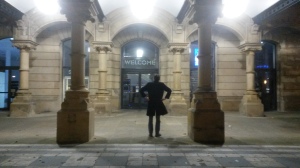 THE ATKINSON, SOUTHPORT (13TH NOVEMBER). I’m still reeling from the throat infection that surfaced in Guildford, though somewhat buoyed up by David Leonard’s kind words about my performance. At least I’ve had four days to recover. I pass the morning on juddering trains of grey and brown, arriving after midday to discover The Atkinson. It’s an all-purpose cultural emporium: museum, art gallery, library and theatre, fronted by some natty Victorian columns. The studio here is a gaping auditorium with prodigiously raked seating. Not what I was expecting. It’s as intimidating (and vertical) as the Linbury Studio at the Royal Opera House. There’s even a piano on the stage, which has to be wheeled from the catchment area of my prodigious gore. None of this does anything for my nerves, which steadily rise throughout an unfocused warm-up. It’s dragged-out, yes; staggered, and for that reason takes nearly three hours.

The show itself goes alright. Just. My vocal range is still coarsened, open vowels emerging with a ragged edge. Dismayed, I overcompensate with excessive energy, and tire before the midpoint. Joy of joys: the most wearying dramatics of Sikes & Nancy commence after the midpoint. I end frustrated (and moist, but mostly frustrated). I feel my brain is dull and unresponsive in the Q&A – still steaming, I imagine, with disappointment at not quite managing the predetermined noises. I overcompensate again, speaking some twenty minutes beyond the allotted time. No good for my ailing larynx, but I hope I efface all memory of the session’s first ten minutes: a madness came over the audience, where I would be interrupted with the next question after giving two or three words of reply. This was surprisingly difficult to break. Evening over, I collapse into my Travelodge bed. Such exhaustion is an urgent reminder: illness or not, there must be a better way to do this. The lesson is frustrated, though, as I still haven’t found the key to holding back. I resolve, at any rate, to defend Idina Menzel on the next occasion her voice doesn’t quite work properly. What it must be to sing – to sing, I ask you! – that particular Frankenstein Monster, knowing each time it’ll be watched by millions and pulled apart by demons. I’m lucky I’m only thwarted, unrecorded, in a studio in Southport. All the same. Could do with Menzel’s salary. 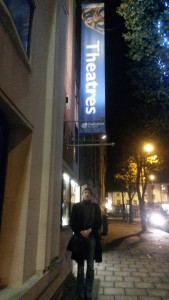 CRAMPHORN THEATRE, CHELMSFORD (14TH NOVEMBER). A hellish day. Traffic jams mean I’m clapped in the tour van for over seven hours before we reach Chelmsford. Such is the cruelty of the touring lifestyle: you reach the point of exhaustion, and then alone do you begin your day’s work. My trailing long legs and trailing long spine take some time to recover. My vocal anxieties have become chronic by now, though this particular venue is thankfully much smaller. Performance-wise, I don’t feel that Chelmsford is any great advance on Southport. It’s underpowered then overpowered; imprecise then too precise, pedantically so; slower than a dying slug, but more uncontrollable than a runaway train. Hissing. Spurting. Ever skirting about the target. And never once hitting it. An unexpectedly dim lighting state means that I play a good twenty minutes without any particular conviction that I can be seen. I very nearly pause to wrench the necessary chairs into the nearest splash of light. All that prevents me is a sense of how absurd it would look: the chairs are standing in for the monumental stone steps of London Bridge. The energies are fatally unbalanced tonight, and I emerge possibly more tired than at Southport.

The Q&A yields a surprise, however. One woman in the audience has been devastated by the play. She tells me that it took her right back to her time with her abusive and controlling ex. Particularly the look in Bill’s eyes come the Murder. (A friend has since told me the same in the London run.) I am quietly terrified. With no first-hand insight into what such relationships must be, I’ve chipped away at Nancy’s desperate lot from the outside. And, in my opinion, not particularly well that night. So this came as a valuable lesson. I mustn’t sabotage myself by trying to be my own audience. I am the vehicle at best. The play can yet mean something to those people in the dark. My self-persecuting intellect does not win out. Not necessarily. 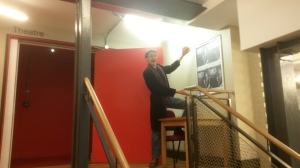 THE OLD FIRE STATION, OXFORD (15TH NOVEMBER). An advance on yesterday, with a scanty four and a half hours in the van. There’s also the inspiriting thought that this is the last of the tour, and I’ll have a good few weeks to revive before entering the West End. I’ve never visited Oxford before, my Oxbridge experience being founded solely on the ‘-bridge’ suffix. But tramping about the town, looking balefully up at castellated walls and gates and towers, I’m reminded of my time at that other university. It was there that I first performed Sikes & Nancy – and gave it so fecklessly, so joyfully, that the event has been deified in my memory. I was so permanently stressed at university, that the theatre was the best and most consistent release for me (when the theatre wasn’t contributing to the stress, of course – which it often did). When I was most unhappily in love, I disappeared into Romeo and Juliet – and when my heart was utterly broken, I was transformed into Quasimodo, into The Hunchback of Notre Dame. A deep conviction that I was somehow unsightly, dysfunctional, peeping in at life from the margins, led to a vast sweep of small grotesque roles (my principal body of work at Cambridge – non-academic, obviously). And my frustration at how small these grotesque roles were led to Pickwick & Nickleby, the first of my one-man plays. No wonder I grew frustrated. Abidingly, the release was in the sheer physical ecstasy of doing the thing. All that nervous energy had to go somewhere. It’s ever been the case that I gain my best ease through discomfort. I became decided then. For the very first time on tour, I don’t bother to write any pre-performance notes. I decide to go forth and enjoy myself. The result is one of the best performances of the tour. I’m helped along by the venue: a dank and shadowy cubicle, every audience member within whispering distance. Still, there’s another lesson there…

… The lesson of Oxford has deepened at Trafalgar. Lightness. Quickness. Ease. Night after night, this has been my pre-state catechism. I consider the smallest (and therefore correct) amount of energy I need to deliver the performance. I shuffle slightly on the chair, locating my sitting bones to correct my breathing. Rearrange the catarrh in my neck. Then the houselights dim and I’m away. It now feels like someone else is doing it. A happy state, almost reverie, though probably sanctioned by the aggravation of various bits of the tour. Self-consciousness has flown for now. Lightness. Quickness. Ease.

I’ve now started thinking on the future of this production diary. It’s become a bit ploddingly dutiful over the last year. The most profound lesson of Sikes & Nancy has been to analyse what I do that bit less and simply get on with it. Everything benefits. I want to avoid the Kenneth Williams trap of ‘living off body fat’ (his words, describing his chatshow afterlife) – boring myself with the same stories and observations, delivered in the same hectoring voice. I’m going to speculate about more effective ways of furthering my acting.

January is to be a month of dreaming. I’ve already set it aside: a refreshingly blank slate. I’ll give myself over, fully and freely, to films, novels, biographies, plays. I’ll go on long walks. Listen to music. Dine on the forbidden cheese and chocolate. And I’ll recharge the batteries. Reassess. There shall be no writing. Not then. But when I do write again, I’ll see to it that it’s worthwhile. Not something I can only bring myself to read through my fingers. Something that breeds ease.