The Funny Man is Me

These burblings are a continuation from last time. For their Newley-bound context, I direct you to the previous installment, ‘Drowning in Your Dream’. For a more primary view of my passion for Newley, read my essay ‘The Fool Must Die’. And rest assured, there is still more Anthony Newley to come – witness this magnificent portrait of his Ebenezer Scrooge (the work of Sacha Newley). 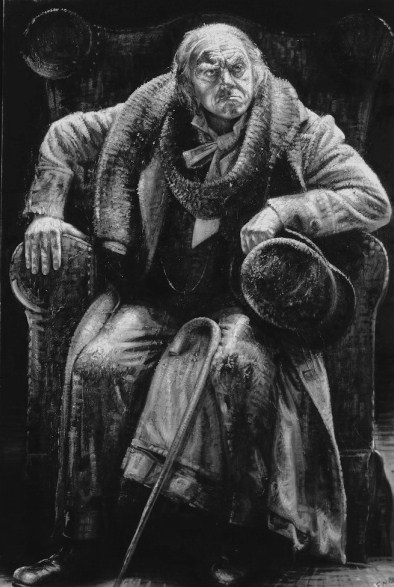 Yes, I fell in love again. I cannot write of the experience in positive terms. It used to be quite different: when I last let myself love – five, nearly six years ago – I was grateful for the feeling to the point of grovelling self-abasement. There’s a social expectation that heartbreak is mentioned only in terms of survivalist positivity. I think this practice abominable. All it does is contribute guilt to suffering – a panic that you’re not getting over things more quickly. But life cannot be reduced to a Gloria Gaynor song. Most responses to break-ups and the like strike me as an effort to not deal with things; to try and dodge all the pain. This, in my experience, is deadly. Pain must be faced down, always. Only then might happiness follow.

Besides, I’m almost certain that people never get over anything. I certainly don’t. All one can do is absorb the change into one’s person and keep on moving. Not move on exactly. Perhaps, at best, move past. ‘Love Has the Longest Memory’ harbours just such a lesson. The lyrics are confused – appropriately and inappropriately – but their musical setting delivers a hammer-blow. The song rounds off Quilp, Newley’s adaptation of The Old Curiosity Shop. It’s faithful to Dickens’ unwittingly masochistic melancholy.

I know I held her hand in mine,
Though time has blurred her touch…
But when night robs my sight
I feel her much too much.

In my case, there was one especially decisive snag. There was not the least point in telling the object of all this loving agony. The man in question was not gay.

This is the baseline misery in gayness, irregardless of social acceptance: the vastly reduced chances of falling for someone who’ll be able to return your love. The body remains a fortress. This holds true even if you swallow the (discredited, surely?) statistic that one in ten people are gay. Still. There’s a bittersweet relief in having so much decided for you. And this before you’ve even begun.

As I wrote last time, my efforts to master my emotions are comical. This time, I wrote searching essays to myself, in a spidery hand – all of which seemed hysterically overblown when read the next morning. I cried very hard indeed – a cry that might as well be a laugh, so forcefully does it break out. I read a great deal too. Primarily about other men who chose silence. Thomas More in A Man for All Seasons (‘it’s a matter of love’), Tom Pinch in Martin Chuzzlewit (‘it will be set right’), and my old friend Kenneth Williams, the most self-important of the tragic clowns. This 1963 diary entry by Williams kept returning to me. It reflected my own morbid frustrations:

I wonder if anyone will ever know about the emptiness of my life. I wonder if anyone will ever stand in a room that I have lived in, and touch the things that were once a part of my life, and wonder about me, and ask themselves what manner of man I was. How to ever tell them? How to ever explain? How to say that I never found Love – how to say that it was all my own fault – that when presented with it, I was afraid & so I spurned it, or laughed at it, or was cruel, and killed it: and knew that in the process I was killing myself.

Newley, by contrast, gave full-throated expression to the void within. His proved the really purgative music. I most often returned to ‘What Kind of Fool Am I?’ This recording shows Newley at the peak of his powers. A grandstanding performance of love – you can see David Bowie emerging – mocking me for staying silent:

Why can’t I fall in love, till I don’t give a damn?

I was staggeringly right to give a damn. To tell the man in question would not have been kind or good. Not right; not under those circumstances. My primary impulse in love is to unburden myself. So many times I wanted to get the feeling out: to say the words, write a letter, do some unambiguous loving deed. My dawning awareness of my responsibilities felt a self-betrayal. Love may not happen very often for me – I’m averaging once every five years – but that’s no reason to inflict it on those at the receiving end. I unburdened myself to three or four good friends, then blundered on.

I can write now, a little, about what made him beautiful. I saw in him ease and simplicity. I saw in him danger and chaos and devil-laughter. I could see the flames of hell licking away at him. Such vulnerability is compelling: pleasure founded on pain, which is anyway essential to pleasure. I loved because he seemed so very unlike me, me, me, coiled-up in my self-reflecting neuroticism. Never could I get out of my own way. Nor could I do homage to him as I saw fit. Any revelation would have been mired in the clumsy, over-earnest flutterings of ‘My First Love Song’. Reading this paragraph, I realise that that still holds true.

Each endeavour
I may make to sing your praises
May not sound as it should do.
But I love you –
Please believe I love you…

There was also a pride in this passion. The sense that the man had a respect for my acting – for The Work, I should say – which had never been the case in my previous love-fallings. Quite the reverse: back then, I’d felt my every appearance on a stage was my saying: ‘How about this? Am I good enough yet? Am I – acceptable?’

This last point should have shown me where my passions truly lay. For whilst this feeling was roaring away, I had my busy, frenetic, jittery, maniacal work – Work – WORK. The last four months of my 2015 were comprehensively rammed. I was in at the Dungeon five, six, sometimes seven days a week. Halloween happened. Sickness happened. And trips to London for auditions and play-readings and meetings meant my very occasional days off were all but monopolised. There was a creative resurgence: a rehearsed reading of The Road with some inspiringly good actors; an overhaul of the Irving play, prior to sending it to colleagues and mentors; devising and writing and rehearsing Winter Gothic in York, thus satisfying my desire to get more plays out. It is staggering that I found time for even my pale ghost of a personal life.

How lost I’d have been without all this. I loved him, in truth, because we were so incompatible. I knew he was no fucking good for me – but he opened up a vision of an entirely different world. ‘Someone Nice Like You’ betokens just such an alternate existence. Below is the bit that breaks me; the most understatedly sad lyric I’ve encountered (find Newley’s version if you can):

And if we could live twice
I’d make life paradise
For someone really nice
Like you.

That hope of living more than once: the last refuge of the damned (recall Patricia Routledge as Alan Bennett’s Lady of Letters: ‘but this is it; this has been my go’). On this occasion, the world of love was all but obscured by my mountain of work. All of which carried me out into the real world, yet further into my fortress-self.

If there’s a running theme in the Newley song-book, it’s that pain might be salved through creative endeavours. I direct you to the galvanic three-fold climax of ‘The Fool Who Dared to Dream’ (as with much Newley, the execution leaves the lyric far behind) and the wistful sadness of ‘Pure Imagination’ (which is all about the lyric: ‘living there, you’ll be free – if you truly wish to be…’). By now, I am pleased to have said nothing. I shall go on saying nothing. Unless I feel I can do some good with the disclosure – a full disclosure. All or nothing again. But I don’t see what good it could do. So nothing it must remain.

How to sum up, then? 2015 seems a year of strange cruelties, of queer and dizzying pointlessness. Yet it was also a year of high comedy – his devil-laughter, yes, but taken over by Newley’s parade of sainted fools. A year of redemption, too – but only ever through The Work. I have no doubt that love is a very great gift. But it may not be a gift for me. Certainly not yet. Perhaps not ever – but should that ‘not ever’ come to pass, I’m hopeful I’ll be too busy working to care.

Let us finish with the strains of Newley’s ‘I’ll Begin Again’. It’s a song from Leslie Bricusse’s underrated Scrooge, which became Newley’s final role in the theatre. It’s a song that overturns the nihilism of Newley’s self-penned ‘I’m All I Need’ (which, believe me, was much with me last year). Through Newley’s performance, it opens out – and up:

I will start anew,
I will make amends,
And I’ll make quite certain
That the story ends
On a note of hope,
On a strong amen,
And I’ll live in praise
Of that moment when
I was able to begin again!

I shall have this song played at my funeral. Not that I plan on dying; I fully intend to live forever. But begin again? I have, and do, and will continue to do so.