Welcome to the fourth of the Sikes & Nancy production diaries! Should it take your fancy, the previous entries are as follows: ‘Forcing the Soul’, ‘The Hertfordshire Horror’ and ‘Into the Black Lagoon’. Now: let’s press on with the scheduled burblings. 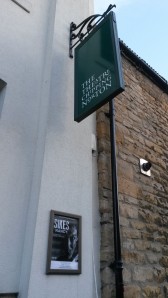 THE THEATRE, CHIPPING NORTON (3RD OCTOBER). The town of Chipping Norton is beautifully haunting. A village that seems cleaved from the cliff-face, everything in stone and at an extreme angle – leading down, down, down to the Gothic church. It’s here that the oldest stones of all are found, as well as the resting-places of the dead.

The theatre was likewise haunting, at least from my view on the stage. We’ve played a few extremely dark spaces on the tour – Radlett, Middlesbrough – but Chipping Norton’s theatre also feels ancient. It put me in mind of the Georgian Theatre, Richmond, where I long ago played in Macbeth: a tall and narrow platform, angled threateningly towards the audience. Perched high on my wooden chairs, I must resemble an enormous bird of prey. I’ve since discovered that the building’s only been a Theatre since 1975 (although the outer structure is nineteenth century), which suggests its atmosphere derives from these spatial peculiarities. For it’s unnerving that the stage, like the village, points straight to the churchyard.

Happily, this performance marked an advance on the breakthroughs of Southend. Everything from the beginnings of the Murder – roughly the last third of the play – has become an exhilarating terror to perform. It’s almost a state of possession, with unpremeditated business breaking forth. Vitally, it seems my brain is alive. And it’s carrying me down increasingly skin-crawling alleys whilst I’m acting:

Silence. It’s becoming a solid object now: heavy, expansive, impenetrably black. It begins when Bill Sikes sneaks through his house-door ahead of killing Nancy: ‘He opened it, softly, with a key: strode lightly up the stairs…’ I treat this as an integrated stage direction, one that calls for a near-balletic motion. Which leads to pauses. Thus the invasion of silence – enfolding the entrance so completely that it feels like the beginnings of a dream. In childhood, I went through a phase of nightmares where I would open my bedroom door and walk straight into dark figures. Never did I see them. I felt them only. As Sikes then, in these silences, I have become that dark figure, that sketchy embodiment of sleep paralysis. Yet I am also Nancy – my childhood self again, the defenceless victim.

The dog as supernatural. I find it very unsettling that Bull’s-Eye rises as though from nowhere. He first appears as a last gruesome touch in the Murder (and one of the scene’s best lines): ‘The very feet of his dog were bloody!!!’ What to make of this? Throughout ‘Sikes and Nancy’, the descriptive passages in Oliver Twist are often cut to allow for more dialogue. Bull’s-Eye – a character with no access to speech – is so diminished by these cuts that his very essence shifts. During his long absences, Bull’s-Eye seems to have been absorbed into Sikes’s being. He has become a witch’s familiar. Or the black dog of English folklore. But then, Bill Sikes is himself absorbed into the Narrator – and I’m still disturbed by the question of the Narrator’s identity…

Who else is present on Sikes’s countryside flight? Jonas Chuzzlewit has started to materialise – a murderer for whom the countryside (and, in particular, leaves) had a special significance. Also Jack Sheppard, from the novel by Ainsworth, who ran rampant through the wilderness after escaping Newgate Gaol. But Eugene Aram is still foremost in my mind, albeit in a state of flux. He started off as the blood-drenched wraith of Thomas Hood’s ballad – but he’s slowly transforming into the brooding, melancholy presence of Edward Bulwer-Lytton’s novel. This version of Aram is close to who I imagine the Narrator would be, were he able to break free from his story: an ascetic scholar and hermit; a pale and sickly neurotic; distrusted by the locals as a sorcerer yet possessed of a mesmeric charisma. It’s fascinating how Dickens’s single mention of ‘the solitude and darkness of the country’ sets an immediate atmosphere of Rural Gothic. It’s a peculiarly English tradition, perhaps encapsulated by Bulwer-Lytton’s Eugene Aram, which overshadows the tranquillity of Grassdale – a fictionalised Knaresborough – with the wilder weather and storm of the Devil’s Crag.

And what to make of that apparition? Dickens describes it as follows: ‘At his head it stood, silent, erect, and still: a human gravestone with its epitaph in Blood!!’ It’s an apparition that resists all visual comprehension. Quite uncharacteristic for Dickens, that most riotously descriptive of writers. It seems more a creature of modern horror folklore, all of whom seem to be unseeable. The shadow demon of the ghost photograph. Sadako in The Ring, head almost entirely obscured by curtains of lank hair. The Slender Man, that man without a face. Even the unseen figures of my childhood nightmares – for no matter where Sikes turns, the figure remains behind him. The apparition is emblematic of what Dickens does throughout ‘Sikes and Nancy’ – eliding the horrifying centre, and suggesting all through the encircling grisly details. Nancy is there and not there. And yet – is it even Nancy at all?

I can quite understand why some actors see ghosts onstage. I, possessed of senses less acute, merely enjoyed a fish supper after Chipping Norton.

CLIFFORD ROOM, BARNFIELD THEATRE, EXETER (4TH OCTOBER). I nearly wound up studying at the University of Exeter. Based on this late visitation, I’d have been content here. It seems I had a knack for picking out locations eerily reminiscent of York. Rambling, hurled-together architecture. Cloistered ruins. Cathedral towns in spirit if not in fact. Which reminds me: I was greatly impressed by Exeter Cathedral, a strikingly bare Norman edifice. Such buildings, even so uncluttered, take me right back to discovering The Hunchback of Notre Dame as a child, and confusing York Minster with Quasimodo’s lair. Combined with some invigorating blasts of wind – and Tony Jay’s Frollo caterwauling on my iPod – this put me in an excellent performance mood.

After the technological wizardry of Southend and Chipping Norton, the Clifford Room proved a simpler arena. It was exactly that: a room. Again were stirred long-forgotten memories of school plays: the stage constructed of interlocking wooden platforms, the auditorium ruled by plastic chairs, the whole lit by flood-lamps rather than modern gels. Yet the Clifford Room is also quietly ambient: a cavernous old hall, evocative of the parish buildings that blight Oliver Twist. This frame is also helpful for encouraging me to focus on my performance at its most basic.

Exeter became the most successful performance yet for discovering the best levels for delivery. Levels are to me about communicating as much as is needed and no more. Yet I find this very difficult to achieve. I’ve long had an onstage anxiety that I’m too quiet and failing to enunciate. (Which is maddening: whatever my faults, I’ve rarely lacked for volume or articulation.) I imagine this springs from a generalised hatred of my voice as I was growing up. Without realising it, I started clamping-down, clamming-up, refusing to speak in public unless absolutely necessary. So whenever I did have to speak in public – teachers love picking out the child who never raises his hand – the act was so unfamiliar (and frightening) that I doubtless over-compensated. I also find levels tricky due to my phenomenally bad eyesight. The audience members I’m trying to reach, even when very close to me, inevitably seem to reside in the far-off distance. Some educated guesswork, and self-forgiving faith, is what’s required. Exeter was an encouraging move from interrogating my voice to trusting it more. Though this may have as much to do with settling into more of a run, my voice more than usually warmed by the last three performances. I should be firing on all cylinders by the time I reach Trafalgar Studios.

Exeter was also excellent for forcing me into an absolute belief in the storytelling. Without the technical infrastructure, there was little other than belief to sustain the atmosphere. Belief is above all what releases melodrama. Yet ‘Sikes and Nancy’ – unlike the run-of-the-mill Victorian melodrama – is a text with genuine literary (and dramatic) merit. So whilst it requires characterisation that might be better described as encrustation – a Dionysian attack – it doesn’t require free-wheeling invention (the ‘devil-dancing’ of which Henry Irving was often accused). The material can be trusted absolutely, without recourse to the tricks that so often signal self-consciousness.

Ralph Richardson captured the nature of this belief – as dreaming to order:

Coquelin has defined this state as ‘dual consciousness’ – the beginnings of real feeling, but tethered by conscious manipulation. As Richardson stresses, you don’t feel ‘complete’ without both. You must be puppet and puppet-master both. I was gladdened to feel some of this control in Exeter. Again, I think, consolidated by the three shows that came before.

Now, however, commences a large gap in the tour. So, that evening, I coat my overtaxed larynx in the previously forbidden alcohol (cider) and chocolate (Bournville). A dubious reward for its labours, though perhaps equivalent to wrapping the larynx in a big warm blanket. Perhaps. A six-hour train journey to York tomorrow – via Wales, bizarrely enough, by no means en route – and then a good few weeks of Henry Irving.