I so enjoyed writing the last entry on the nascent subgenre of fantasy noir that I’ve compiled a sequel. So much of what drives my writing is the fanatical belief that most of my time is squandered, wasted, frittered away. Prizing up these decaying films consumes such a lot of my time that it’s refreshing to convert it into something of substance. Here, then, is the next kaleidoscope of uncanny cinema. Points of focus include theological uncertainty, coded colour, and, surprisingly often, new beginnings.

Images are central to my relationship with acting – and cinema, at its best, is a treasure-house of images. Murnau’s Faust is a film in which unforgettable acting and images converge. This is largely due to Emil Jannings’ matchless performance as Mephisto. Jannings, later a star of Nazi propaganda films, is a difficult man to love; the Wagner of silent cinema. Yet there’s no denying his visual majesty as an actor. His Satan goes through three distinct incarnations, beating out Pazuzu in The Exorcist (1973) by half a century. There’s the bewinged, blackened demon of the opening – very similar to Chernabog in Fantasia (1940), as it looms over the plague-stricken village. There’s the filthy peasant – a mud-spattered, pedlar-like figure – and finally the more natty Mephisto in black silks. All are exquisite: nightmare beings who stand with Max Schreck’s Count Orlok and Lon Chaney’s Phantom as the silent cinema’s finest grotesques. In its live-action visualisation of demonic forces, Faust‘s only serious rival is Häxan (1922), Benjamin Christensen’s wild and woolly ‘Witchcraft through the Ages’. Christensen, however, fashions a Boschian nightmare of oppressive, unrelenting darkness, in which the Devil’s only serious rival is Freudian pseudo-psychology. Murnau’s demons gain by their relationship with the forces of light. The opening clash of Angel and Devil, sweeping away the skeletal spectres of the Four Horsemen, is Miltonic in the best sense. There’s no doubt a salient point here about silent cinema being nothing other than the clash of light and dark. But Murnau’s visual instincts are also thoroughly medieval, creating a sense of primary sources; one can imagine Milton taking in Faust before composing Paradise Lost. The out-of-the-kit trickery of the magic carpet ride is a perfect example: you know you’re looking at miniatures, but they’re exquisite for their unreality. Like a cathedral reaching for the heavens, Murnau’s film is a non-reality (or unprovable reality) breathtakingly visualised. 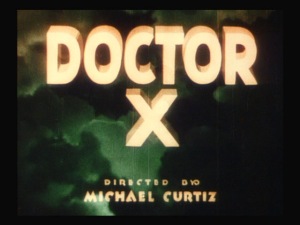 A bafflingly weird film, this – on several counts. There’s one of the most disturbing scenes of the thirties: an achingly long sequence in which the killer applies lumps of repulsive ‘synthetic flesh’ to his head – which resolve, bit by bit, into a horribly scarred new face. There’s also the two-strip Technicolor, which accentuates the film’s sickly atmosphere by granting it the caste of toxic waste. Even elements that were hackneyed in 1932 seem otherworldly today: Gothic mansions, lightning storms, hooded maniacs, mad scientists with fitting laboratories and skeletons in cupboards (furthermore, the climax seems to be drawn from Paris’s Grand Guignol). These stock horror components prove strangely refreshing, confirming the power of these archetypal films. The screenplay is drawn from one of the long line of ‘old dark house’ thrillers that stormed Broadway in the twenties. Other mythic titles from this period include The Bat, The Gorilla, The Cat and the Canary, and, of course, Dracula. Although Doctor X (1932) has never had a remake, its immortality was confirmed by Richard O’Brien’s lyric in The Rocky Horror Picture Show (1975): ‘Science fiction double feature / Doctor X will build a creature…’ But despite Doctor X‘s peerless weirdness, the careers of its principal creatives became steadily more conventional. Doctor X crowned Lionel Atwill as the most perverse of Hollywood’s horror actors, paving the way for such kinkily suggestive classics as The Vampire Bat, Mystery of the Wax Museum, Murders in the Zoo (all 1933), and, best of all, Son of Frankenstein (1939). It’s a far cry from Atwill’s sad final roles – inevitably consigned to dishwater-dull red herrings and interchangeable police inspectors in such Universals as Night Monster (1942) and House of Dracula (1945). Director Michael Curtiz did rather better, eventually graduating to The Adventures of Robin Hood (1938) and Casablanca (1942). He never returned to the spook-house seediness of this melting-pot movie; its sister film, Mystery of the Wax Museum, is comparatively streamlined. Doctor X shines as a beacon of weirdness for Atwill and Curtiz alike: an artefact that could only have existed for a couple of months in the early thirties.

Here Comes Mr. Jordan (1941) invites comparison with Portrait of Jennie (1948) as a thought-provoking supernatural fantasy – dwelling gently, even elegiacally, on the nature of mortality. Portrait of Jennie, however, is no comedy. Here Comes Mr. Jordan reminds me a little of Robin Williams’ Bicentennial Man (1999) in its tonal confusion: part brain-free hilarity, part intense fatalistic brooding. Their plots are also similar: a man is forced through multiple changes of body, eventually gaining a deeper humanity, but reaching no easy answers about the place of the soul. It seems likely that contemporary audiences were hardened to such questions: it may have been the background presence of the Second World War that reduced Here Comes Mr. Jordan to a basically unthreatening screwball fairytale. Still, it’s hard not to be perplexed by a film that treats bathtub-based homicide and hiding a corpse in an icebox with such light-hearted ease – and then, in only a wink, have the protagonists stare into each other’s eyes and fall in love with each other’s souls. But maybe in that sense, the film has its priorities right: it’s the purity of the spirit that matters, not the ravages done to the body. Quite a few bodies contribute to this film’s appeal. Claude Rains is predictably splendid, and his unreadable, cat-like facial arrangements keep the story’s secrets locked tight. His role as God is an amusing balance to his part as the Devil in Angel on My Shoulder (1946) – another theologically knotted fantasy, in which Rains delivers the immortal line ‘What in my domain is that?’ It’s curious to find Edward Everett Horton playing a character other than a butler – although his function as Rains’ prissy underling ensures he remains butler in spirit. And fortunately, there’s also Halliwell Hobbes, that other eternal butler (and unrecognisable from 1931’s Dr. Jekyll and Mr. Hyde), on hand for regular duties. There’s a great charm to this film, and a sweetness that seems sincere, but also an imbalance in its secular, no-nonsense, not-quite-Christian doctrine. Here Comes Mr. Jordan wasn’t built to be analysed so coldly – but such analysis does keep it fascinating.

The first of the Hammer Gothics; a cracking film. It’s some sort of heresy, but I’ve always preferred The Curse of Frankenstein (1957) to the (justly) vaunted Hammer Dracula (1958). The traditional argument is that Dracula was Hammer coming to full, bloody fruition; The Curse of Frankenstein, by contrast, shows Hammer holding back a bit, not quite certain what they’ve gotten hold of. It might be that modicum of restraint that leaves me preferring The Curse of Frankenstein. There’s a veneer of elegance to the film – a pokiness, a staginess, a gloss, a polish – that threatens at all times to give way. The film’s colour scheme rarely strays beyond light pastels. Yet there are intermittent flashes of red: from laboratory beakers and electrical pulses, from carefully painted leaves and lurid splashes of blood. The film enters Nicolas Roeg territory at times, anticipating Don’t Look Now (1973) by sixteen years. As with The Body Snatcher (1945), there’s the positive sense that ninety percent of The Curse of Frankenstein would work as a taut and tense stage play: the literate script (clever without drawing attention to itself) and marvellous supporting cast (even the dog is good!) make it so. Given that Hammer’s decline came when they went full-frontal – with sadism, gore and nubile peasant girls – there’s much to be said for The Curse of Frankenstein‘s frosty British reserve. This finds its truest expression in Peter Cushing’s peerless performance as Baron Victor Frankenstein. I’ve long thought that Peter Cushing was the single best thing about Laurence Olivier’s Hamlet (1948). The Curse of Frankenstein cements Cushing’s reputation as the Olivier of horror. In my view, it’s Cushing’s best performance in the six-film series – narrowly edging out the heartless sadist found in Frankenstein Must Be Destroyed (1969). Taken as the sum of those six parts, Cushing’s Baron adds up to the most brilliantly conceived and realised character in all of horror cinema. It’s a sixteen-year mosaic of a genius’s decline from Byronic narcissism (The Curse of Frankenstein) to chillingly doddering insanity (in 1973’s Frankenstein and the Monster from Hell). And all this without mentioning Christopher Lee’s underrated, career-making turn as the Creature. The film demands to be seen.

Now that I’ve introduced the first of the Hammer Gothics, it would be remiss to ignore their American cousin: the Roger Corman Poe film. House of Usher (1960) was the first, and, in my opinion, the very best of a distinguished bunch. Each entry in the series had its highlights – the frenzied torture devices in Pit and the Pendulum (1961), the lavish photography in The Masque of the Red Death, the picturesque abbey ruins in The Tomb of Ligeia (both 1964) – but none improved on the cohesion achieved here. Corman’s style borders on the camp at times (early Hammer never did), but this gives the necessary lift to a story that would otherwise be unbelievably depressing (all but one character dies). Visually, the film is immersive, enveloping: all dark curtains, red candlesticks, bronze sculptures, and the occasional Daliesque portrait of an Usher ancestor. Even Mark Damon, an undeniably weak actor, is visually the part to perfection. Supreme among House of Usher‘s visual highlights is the dream sequence, which unfolds in incandescently colourful fogs, as the ghosts of the Usher ancestors make themselves known. As in The Curse of Frankenstein, the onslaught of colour signifies the belly of the beast; an evil undercurrent granted glorious eruption. The impact of the dream is heightened by Les Baxter’s use of a ghostly choir – in broad Halloween style, they even make little ‘woo!’ noises – a musical detail that would resurface in Tales of Terror (1962). Baxter’s lush symphonic score – littered with heraldic motifs, echoing dissonance, and heart-piercing romantic strings – is another of the film’s strengths. As Roderick Usher, Vincent Price gives the best horror performance of his career. Like the film in which it resides, its impact is profoundly sensual, perhaps taking its cue from the character’s hypersensitivity. It might best be described as syphilis personified. Price offers up a desiccated voluptuary wrapped in garish red velvet; his bleached hair and clean-shaven visage create a Price unrecognisable from the mustachioed rogue of House on Haunted Hill and The Bat (both 1959). There’s such unwavering belief in what Price does with Usher that it overshadows the tongue-in-cheek, Phibes-like villains he would play as his career progressed. As he lights his candles and plucks at the strings of a lute, one wonders at the great Shakespearean career Price might have had. (1973’s Theatre of Blood is sadly no indication.) Luckily for us, the fates sorted things differently. House of Usher is perhaps the most unheralded American horror film of the sixties.