At the climax of The Flesh and the Fiends – John Gilling’s sterling 1960 body-snatching melodrama – William Hare is hounded through the darkened streets of Edinburgh. His last-ditch hideout is an abandoned old house. As he barricades the door, the mob lights its torches. As he canters ineffectually up a staircase, the mob beats his feeble defences down and throngs inside the building. And as he lunges for some iron bars, his terrified face is thrust at once into startling close-up. It’s an unforgettable image: Donald Pleasence, slime personified. The ravening mob takes hold of Hare, and drags him off into the dark.

By this time, The Flesh and the Fiends had become a film event for me. This had nothing to do with Peter Cushing (here, as always, the Olivier of horror), nor the admirable work of director John Gilling (who helmed Hammer’s superlative Cornish horrors The Plague of the Zombies and The Reptile). Instead, this conviction came from an eerie sense of recall. Here again was the murderer running fugitive from the mob; here were all the old feelings of terror and guilt and a strange exhilaration; here was what looked suspiciously like (and, as it turned out, was) stock footage from David Lean’s Oliver Twist. That last close-up of Hare came almost as a premonition.

It gives me very great pleasure to announce that Sikes & Nancy is coming back. For three nights in February, I’ll be evading the torch-wielding mob at the Mercury Theatre, Colchester. To ensure that the details are branded on your memory, here are the precise times and dates in the boldest of bold capitals:

And while I’m at it, here’s a lovely new publicity image. Flocked wallpaper and blood spatters in bilious harmony: 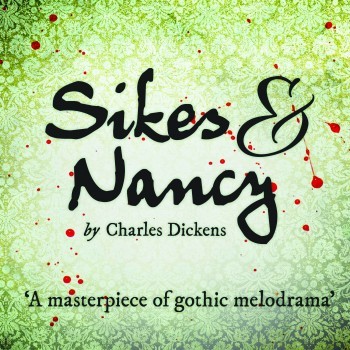 Just marvellous. In the modern tradition, tickets can be booked online at the Mercury Theatre’s website. All manner of concessions are available, so it’s worth looking into. At the very least, do ‘Like’ the page and boost my fragile ego on Facebook!

But wait! Why should you bother coming to Sikes & Nancy at all? My arguments for the piece’s merits are well rehearsed by now. Sikes & Nancy is pure theatrical storytelling: I speak out to the audience and unfold the tale, without resorting to any artifice beyond myself and a few chairs. It has a clutch of the greatest characters in English literature – Fagin, Nancy, Bill Sikes – all of whom make a powerful plea to the emotions. Yet it’s also straightforwardly entertaining, deriving its thrills from blood-and-thunder melodrama as much as the fact that it polished off Charles Dickens.

More widely, Sikes & Nancy has received stonkingly good feedback. There have been five stars from TCS and Varsity both; student journalism and I don’t always get on, but I bow to the eminently correct appraisals of these particular critics. It’s been warmly received by audiences as far-flung as Cambridge, York and London’s West End. No less a legend than Simon Callow witnessed and enjoyed the West End rendition, before hurtling off to kill his own Nancy in The Mystery of Charles Dickens. And whilst Sikes & Nancy has never been short of interesting venues (not least Lady Peckett’s haunted mead room), the Mercury is a beautiful theatre with a glowing reputation, well worth visiting in its own right. Add to this the sheer length of time I’ve been working on Sikes & Nancy – ten months thus far – and you can rest assured it’ll be coming back stronger than ever. The script is being refined; the thought processes are bubbling up and strengthening; the acting is growing more distinct, more precise. I personally rank it among my two or three best performances.

My engagement at Colchester is significant in another way: I consider it my professional stage debut. ‘Consider’ because I’m not sure precisely when an amateur credit becomes professional. What of plays with professional directors, after all? Or those staged in professional venues? And where exactly does the Dungeon fit in? Nonetheless, this revival of Sikes & Nancy is a personal milestone. It’s providing me the first glancing possibility that I might be able to do this for a living. There’s some way to go yet, but the hope is very welcome.

I’m not sure how much I’ll be blodgering on the rehearsal process, since I’ve covered a lot of this ground before. Here are links to five previous posts, all of which focus on different aspects of Sikes & Nancy. Lest the play seem scarily well documented – or (God forbid!) ‘professional’ – bear in mind that each post is littered with digressions.

Two Goodly Announcements: My announcement of the play’s 2012 engagements in York and London. It also contains my all-time best argument for attending Sikes & Nancy. Digressions include EastEnders barrow-boys, Rotten Corpse and the Dungeon Halloween that was so cruelly stolen.

First Re-Readthrough: My thoughts after a close reading of the script. Inevitably in-depth, so if you have a copy of Oliver Twist, you’re advised to dig it out. Digressions on Christopher Marlowe, Alfred Hitchcock, Sweeney Todd, Ingrid Bergman, Stephen King and the Groke.

Re-Rehearsals Underway: A more general update, focused on the umpteen problems of restaging a play, from change for change’s sake to the art of the extra-textual. Also includes Edward Quekett’s gorgeous poster design for the original. Digressions: ‘Macbeth doth murder sleep’; ‘everybody ought to have a maid’; ‘ah, well, you know, that sort of ish-ness’.

An Exercise in Quotation: A study of the original text of Oliver Twist, coupled with Dickens’s accounts of murder in The Pickwick Papers and Master Humphrey’s Clock. In other words (Dickens’s, to be precise), an opportunity to quote some rip-roaring prose. D: comedy catchphrases, social niceties, the Daily Mail (only two of those go together).

Of course, these foundations will count for nothing without continued development. My primary rehearsal aim is to make Sikes & Nancy as truthful as possible. Not by searching for a naturalistic truth, but an emotional truth. And not a naturalistic-emotional truth, but a more intuitive emotional truth, geared at all times towards heightened expression. I’ve been inspired in this regard by Charles Laughton. The BBC quietly aired a season of Laughton films over Christmas, marking fifty years since the actor’s death. His performances have been a highlight of the last few months: I’ve happily devoured The Private Life of Henry VIII (1933), Rembrandt (1936), Captain Kidd (1945), Arch of Triumph, The Big Clock (both 1948), The Strange Door (1951) and, yes, even Abbott and Costello Meet Captain Kidd (1952). Laughton is at his best when he breaks your heart, as demonstrated in his towering Quasimodo. I’ve found myself deeply moved by two performances especially: the eye-rolling, cuckolded grape farmer in They Knew What They Wanted (1940) and the pathetically defeated schoolmaster in This Land Is Mine (1943). The latter should be compulsory viewing for anyone possessing a heart and a soul.

Laughton’s genius was to discover an intensity in his characters, so overwhelming, so breathtaking, that he often transcended the limitations of the dramas in which he appeared. Yet Laughton seldom achieved this by imposing on his text: his gift was to convert his text into a dazzling, extrovert projection. This seems to me a sensible approach to Sikes & Nancy. Never to impose, but always to find where the energies of text and actor unite to the greatest expressive end. I’m accordingly reading Michael Chekhov’s To the Actor; his belief in the imagination as an ever-expanding resource is wonderfully freeing:

A sensitive body and a rich, colourful psychology are mutually complementary to each other and create that harmony so necessary to the attainment of the actor’s professional aim. You will achieve it by constantly enlarging the circle of your interests. Try to experience or assume the psychology of other eras by reading period plays, historical novels or even history itself. While doing so, try to penetrate their thinking without imposing upon them your modern points of view, moral concepts, social principles or anything else that is of a personal nature or opinion.

Chekhov states that physical and vocal physical freedom are imperative to this regime. Imagination is pointless, after all, when not permitted to get out. To this end, I’m going to be working at my voice. A stable grasp of my natural voice has long eluded me. In Sikes & Nancy, it’s essential that the narrator speak cleanly and economically, so a study of Cicely Berry and Patsy Rodenburg will be a great help. I’ve been up to a fair bit of physical ‘training’ recently, to counter my long-standing back problems, so I should be performing in a state of resolutely improving health.

Otherwise, I’m seeking to immerse myself in Dickens’s world (no, not this Dickens World) as much as is humanly possible. I recently finished The Mystery of Edwin Drood for the first time. Its shameful murder, Gothic streak and transcendent descriptions of light will all be very useful. (Dickens was performing ‘Sikes and Nancy’ for the last few times as he was writing Drood.) The moment I finish A Tale of Two Cities, I’m going to plunge into The Old Curiosity Shop, steeped as it is in the Victorian obsession with young, beautiful, dead girls. (Nancy has retrospectively fallen into this morbid tradition, thanks to her glamorisation in umpteen stage and film adaptations.) I’d also love to get round to Barnaby Rudge, having heard so much about its depiction of the mob, but I doubt I’ll have time. Meanwhile, Malcolm Andrews’s terrific Charles Dickens and His Performing Selves has been renewing my education in the Dickens Public Reading (a storehouse of knowledge long since banished to the murky realm of dissertation). There are also two classical plays that I’ve been meaning to get back to for ages: The Jew of Malta (the most positive statement that hilarious Jewish criminals need not be anti-Semitic) and Macbeth (in my view, the dramatic ancestor of Sikes & Nancy, and a play that Dickens revered).

I’m still refining the scripts for Frankenstein and Dracula (one more draft for each), so my workload will be intense in the weeks to come. But I’m utterly delighted that that’s the case. So please: do me that best of services, and make an effort to see Sikes & Nancy. I promise you won’t regret it.